What are the differences between an electronic ballast and a conventional ballast?

The classic among the ballasts (KVG) for the discharge lamps used in cannabis cultivation are conventional ballasts, now sometimes called semi-electronic ballasts. Your advantage is clearly in your longevity, reliability and price. A conventional ballast with a power of 250W in a simple version is already available from about 42 euros, a ballast with 600W already from about 55 euros. So much for the benefits.

The disadvantages of a conventional ballast are in any case the high heat development of the ballasts, the power losses of 10-20% of the rated lamp power, the high weight (several kilograms per ballast) and the often high noise level of the Vorschalgeräts (buzzing). In addition, a conventional and semi-electronic ballast produces a high proportion of reactive current, which can cause unwanted abnormalities in the operation, especially of several Voschaltgeräte in the power grid are easily measurable and can be assigned to the devices. Finally, it should be mentioned that the bulbs are significantly more stressed in a conventional and semi-electronic ballast and their lifespan is greatly reduced. The bulbs should be changed after about one year in normal operation, since it changed its light spectrum from this point on and no longer gives off the optimal for plant / flower growth light. In addition, from this time onwards, lighter items are more often completely eliminated. 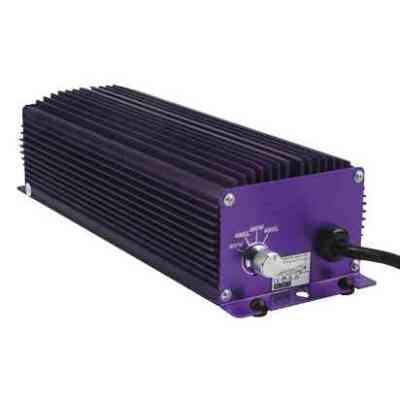